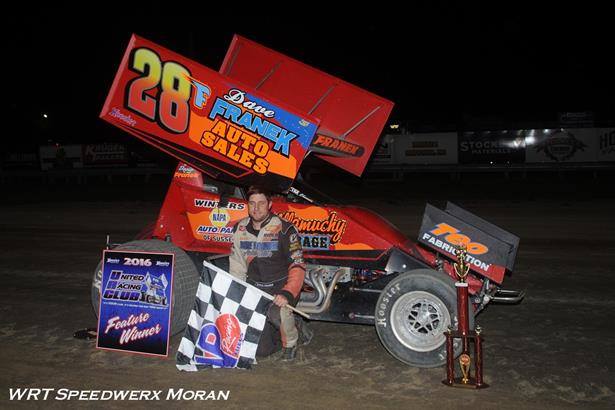 Racing had been scheduled for Friday night at Georgetown. However, the event was postponed to Sunday due to rain and thunderstorms on the original date. Despite, the late addition of a rain date, a healthy crowd and robust field of competitors migrated to the Sussex County track for the event.

For Franek, the win was emotional. He dedicated the effort to late crew member and friend Guy Howie, who recently passed away. Howie had a long history with URC and most recently supported Franek’s efforts.

“This one is for Guy,” Franek said in Victory Lane.

Robbie Stillwaggon led the potent URC field to green, but it was Franek, who started second after a post-qualifying invert of nine cars, darting into the lead at the outset.

During a stretch of green-flag racing in the event’s first half, Franek and Stillwaggon dashed through slower traffic masterfully.

Franek’s most formidable challenge occurred on a lap-17 restart. Stillwaggon pulled even with the leader, racing side-by-side through turns one and two and down the backstretch. A second caution, however, prompted a single-file restart.

“It was hard racing there with Robbie,” Franek said. “We might have made a little contact out of (turn) two.”

Milford, Del., driver Jeremy Harrington earned a $600 victory in the 20-lap Crate 602 Sportsman main. Harrington started from the pole via a redraw of top qualifiers and led from start-to-finish, fending off the relentless challenges of Scott Hitchens. Harrington is a winner at N.J.’s Bridgeport Speedway this season.

Hitchens finished second, followed by Westley Smith, 10th-starter Brett Ballard and Jordn Justice, up from 14th on the grid.

In a thrilling 12-lap Delmarva Charger main, Jerry Barker emerged from a back-and-forth tussle with Geoff Carey to take the win. Barker and Carey swapped the lead on at least a half-dozen occasions before driving to the $200 payday. Tanner Marvel, Scott Calhoun and Bud Sipple finished third through fifth, respectively.

With persistent weekend rain for the past month, Sunday’s Georgetown program was the first dirt-track event in the state of Delaware since mid-April….

URC frontrunner Brian Carber had a short night after being collected in an opening-lap skirmish to start his heat race….

Racing resumes at Georgetown Speedway on Thursday, June 2 with the Ultimate Super Late Model Series invading the state of Delaware for the first time in history. The ‘First State 40’ presented by Bi-Rite Auto Sales offers $5,000 to win and $400 to start. It serves as the kick-off to the ‘Colonial Clash Championship’ four-night series with a $17,000 point fund. Also on the card are Crate 602 Sportsman, Delmarva Chargers and Super Trucks.