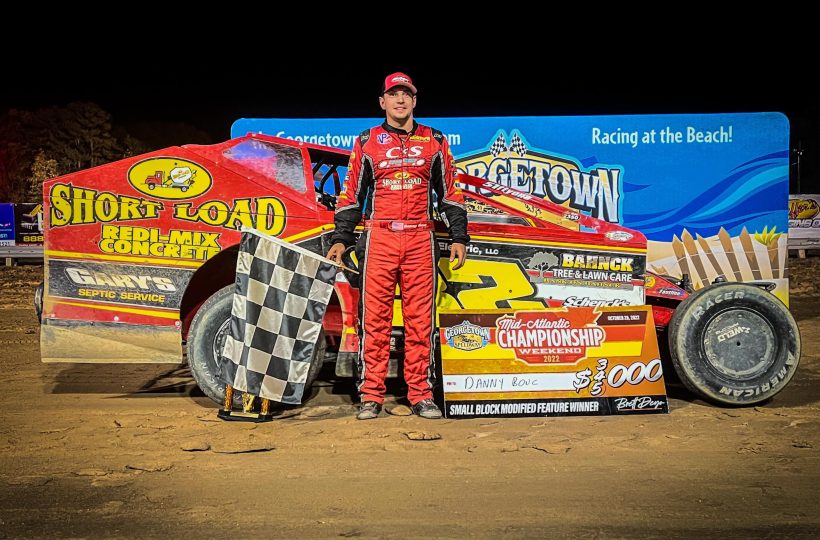 The STSS Modifieds took part in three qualifying events, with the top four locking into the redraw for the 40-lap, $25,000-to-win main event, with the fifth and sixth place finishers also advancing to the feature.

Perrego, the most recent STSS winner at Orange County Fair Speedway in Middletown, N.Y., led all 15-laps of the Mullins Auto Brokers/Bintelli of Delmarva Street Legal Golf Carts Qualifier No. 1 to claim the $500 victory.

Perrego, after starting on the pole, used his infatuation with Georgetown Speedway to dominate the 15-lap affair.

“To walk in the gate and draw No. 5 (at the pre-race draw for heat race starting positions) gave us high hopes,” explained Perrego of his night. “We were able to go out there and do our job.”

Milford, Del., resident Jordan Watson offered a slight challenge to Perrego for the win at the halfway mark but was forced to settle for second. Ringoes, N.J.’s Ryan Godown and Johnstown, N.Y.’s Rocky Warner rounded out the cars advancing to the redraw.

Savannah, N.Y.’s Matt Sheppard continues to raise his performance when the money is on the line, claiming Ad-Art Sign Company

Sheppard started from the fourth position and quickly advanced to the runner-up spot. Sheppard would work over Pennsylvania native Rick Laubach for several laps before sliding by and driving away with the victory.

“I felt really good here in the summer, but don’t feel quite as good here right now,” Sheppard said of his racecar. “We chased it last night and we’re going to keep chasing it for tomorrow.”

Laubach held on for a runner-up finish with Lambertville, N.J.’s Cale Ross and Pipersville, Pa.’s Danny Bouc rounding out the redraw cars.

“We were able to pick our way to the front pretty cleanly I thought… the track is in great shape, and we’ve got some great weather for tomorrow so we’re looking forward to it,” smiled Stewart Friesen following his victory.

Bouc has claimed the first two legs of the three-race weekend, winning the 30-lap Camp Barnes Benefit Race on Thursday night, worth another $5,500 to his bank account.

“We’ve been squeaking them out this weekend for sure,” proclaimed an overjoyed Bouc in Victory Lane. “These past two days are starting to make up for everything that’s happened to us here over the years.”

Bouc went from the fifth position, with Neshanic Station, N.J.’s Matt Stangle leading the field to the green flag.

Bouc worked his way to the runner-up position early, but Stangle led and appeared to be the best car on the racetrack.

On lap 10, however, Stangle’s night ended in unceremonious fashion. His car went up in smoke, retiring him to the pit area for the remainder of the race.

Bouc inherited the lead and fought off challenges from Jordan Watson, Danny Creeden, and ultimately Jeff Strunk at the end to claim the victory.

Strunk settled for second to Bouc for another night after throwing everything he had at Bouc to get by with the Glenn and Bonita Hyneman No. 126.

Jordan Watson rounded out the podium with the Dan Sommeling owned No. 51. Mike Gular rebounded from an early race tangle to come home fourth in the Terry Fasnacht owned No. 2A and Oley, Pa.’s Louden Reimert rounded out the top five.

Collins will join the heat winners in the redraw for the feature event.

Matt Hill was dominant in the First State Chevrolet RUSH Late Model feature. Hill fired from the outside pole and led all 20 laps for the victory.

The fourth-place finish for Collins was enough to claim his second consecutive RUSH Late Model championship at Georgetown Speedway worth $750.

In Southern Delaware Vintage Modified competition, Brett Ballard (Modified) and Roscoe Clough (Sportsman) were victorious at the end of the 12-lap race.

In another battle of the Smith’s, Robert Smith outdueled brother David Smith to win the Delaware Super Truck feature, after Matt Smith won the 12-lap affair on Thursday night.

Geoff Carey avenged his runner-up finish on Thursday night with a win in the 12-lap Delmarva Charger feature.

The STSS Crate 602 Sportsman concludes the Belmont’s Garage South Region, going 25-laps for a $1,500 top prize. Also on the card are the Little Lincolns, Delaware Super Trucks, and Delmarva Chargers.

Did Not Start: David Parsons