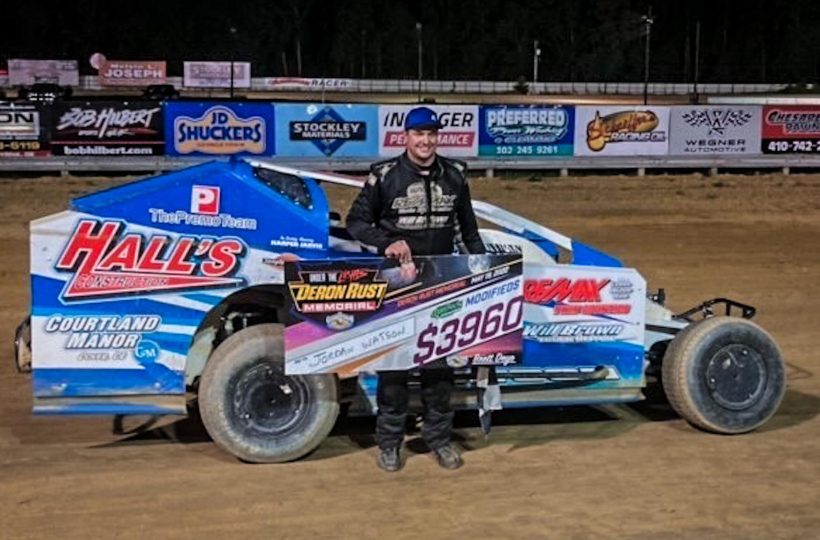 After the postponement of the Melvin L. Joseph Memorial to late October, the Deron Rust Memorial slid into the role of the first big-block/small-block feature of the 2022 season at the historic Sussex County oval.

“There’s nothing like coming to Georgetown and defending our home turf. There’s a hell of a lot of good drivers that come down here to race,” explained an emotional Watson in Victory Lane following the win over the 27-car field.

The Milford, Del. native’s triumph netted him a $4,356 payday for his efforts – $3,960 for the win and $396 from Paradise Senior Living for being the highest-finishing Delaware driver in the event. Deron Rust’s No. 396 was featured heavily throughout the night.

Following the redraw, Watson joined Belle Mead, N.J.’s Brandon Grosso on the front row of the 33-lap main event. At the drop of speedway starter Joe Kriss’ green flags, Watson raced out to the lead from his outside pole starting position.

An early yellow on lap three set the stage for a caution-plagued start to the race. H.J. Bunting first went over the banking in turn three. On the restart, Watson chose the inside lane, contrary to the top where he took the lead on the initial restart.

Grosso took advantage, racing ahead of Watson, but another yellow flew before the lap was complete, giving Watson the lead back. This time the caution was displayed for a tangle in turn three involving Carson Wright and Norman Short.

“I felt like I could fire off the bottom well, I just didn’t do my job on that restart, but after that I knew I needed to be up on the top,” explained Watson of the lesson learned on that restart.

The next attempt at a restart on lap three would only bring more mayhem. Ryan Watt – who restarted third – got turned sideways in front of the field. The pile-up ended the night for several drivers and sent a half-dozen cars to the pits for repairs.

The field finally settled in on the third attempt at the lap-three restart, and Pipersville, Pa.’s Danny Bouc was the man to take advantage. Bouc raced from sixth to third on the restart in his Craig and Leslie Pondish No. 6 car.

Bouc began to chase the top two before another yellow flew on lap nine as Richie Pratt Jr. slowed with a left-rear flat tire. The next yellow would fall just one lap later, as Ryan Riddle’s racecar broke and got over the turns one and two embankment.

Things settled in from there and the final 23 laps fired off caution free. Bouc raced by Grosso on lap 11 to take the runner-up spot, setting himself up for a run at Watson at the head of the field.

Ringoes, N.J.’s Ryan Godown was another driver who began to move forward during the green-flag stretch. Godown – who started 11th – challenged Neshanic Station, N.J.’s Matt Stangle for several laps before taking fourth away on lap 16. Seven laps later, Godown pulled a slide job on Grosso to move into the final podium spot.

Frenchtown, N.J.’s Billy Pauch Jr. – who entered the night with a five-race win streak at Georgetown – was also moving forward after being involved in the pile-up on lap three. Pauch Jr. had risen to sixth before sliding by Stangle for fifth on lap 29.

Out front, Watson was on cruise control. The First State driver held on for his first win of the 2022 season, outlasting Bouc at the end for the win.

Bouc, who closed the gap in the late stages, came up short with a runner-up finish. Godown’s charge awarded him with a third-place finish and Pauch Jr. raced back to fourth. Stangle slid by Grosso on the last lap to take fifth, dropping Grosso back to sixth at the line.

Oley, Pa.’s Louden Reimert finished ninth in his debut behind the wheel of the Don Grebe-owned No. 33 and Richie Pratt Jr. rounded out a chaotic night with a top-10 in the Dan Sommeling-owned No. 51.

Toth raced from his fifth starting position to take second in the opening laps. After that, the defending champion found his rhythm, reeling in and passing Jordn Justice to take the lead away as the field completed its sixth circuit.

Toth led the rest of the way from there, with Belle Mead, N.J.’s Justin Grosso in tow, coming home second. Justice, of Laurel, Del., rounded out the podium with a third-place run. Dagsboro, Del.’s Scott Hitchens claimed fourth and Odessa, Del.’s Tom Moore Jr. rounded out the top-five.

Kerry King won the 12-lap Southern Delaware Vintage Modified feature, using a restart with one lap to go to race around Jamie Eicholz for the win. Nathan Smith held off a hard charging Roscoe Clough – who started last – for the Sportsman win.

Jesse West won what he called “one of the most exciting races I’ve ever been in,” in the Delaware Super Truck 12-lap feature. West and Jerry Hill battled for the entire 12-lap affair before West passed Hill in the late stages for the victory. R.J. Robinson stole second late and Hill rounded out the top three.

Geoff Carey won the first feature of the night in the Delmarva Charger division. Carey – who also started last – drove to second but was well behind leader Jay Lowman. Lowman began to lose power, allowing Carey to drive by and ultimately take the 12-lap victory. Carey topped Paul Gary and Garrett Smith for the victory.

Action resumes at Georgetown Speedway on June 3 with the Mid-Atlantic Sprint Cars making their only appearance of 2022. The J.W. Brown Logging Modifieds will race for 25-laps and a $3,000 payday and the RUSH Late Models will go 20-laps for $1,000-to-win. The Southern Delaware Vintage Stock Cars, Delaware Super Trucks, and Delmarva Chargers round out the racing program.