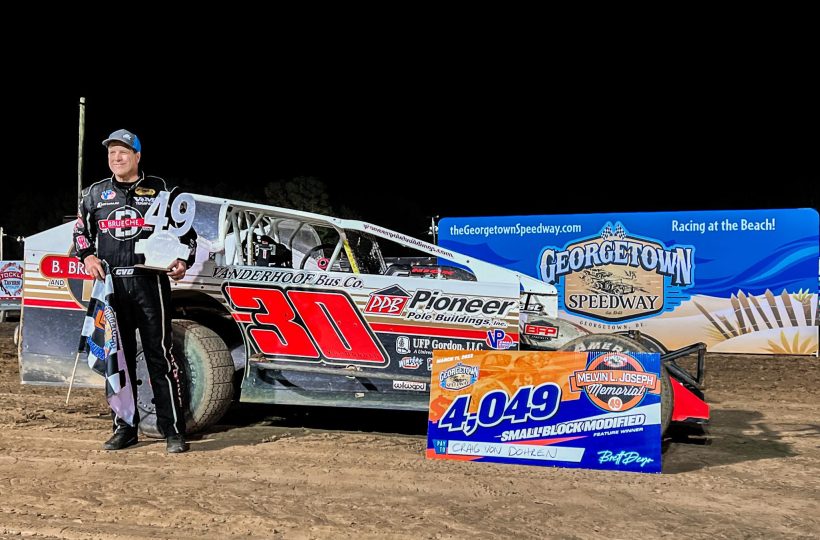 Von Dohren’s victory was worth $4,049 in honor of Melvin L. Joseph, the Delaware business and auto racing icon who constructed the Sussex County oval in 1949 and opened it one year later.

After the weekend honoring Georgetown’s architect was shortened due to a wet and cold Saturday and Sunday forecast, Friday night’s program took center stage. Oley, Pa.’s Von Dohren was the star of the show.

“You work on these cars all winter long and you make no money… it’s good to get some money in my pocket to start the year,” proclaimed a happy Von Dohren in Victory Lane.

Sayreville, N.J.’s Dominick Buffalino and Milford, Del.’s Joseph Watson led the field to green in the 30-lap main event. Buffalino jumped out to the early lead, setting a torrid pace for the rest of the field to maintain.

A lap-six yellow reshuffled the deck and allowed Frenchtown, N.J.’s Billy Pauch Jr. to enter the fray. The “Kid’s Kid” used the outside lane from his sixth restarting position to drive around three cars and into third before the seventh lap was completed.

Pauch Jr.’s charge continued as he swept past Joseph Watson for second as the field completed the 10th circuit around the progressively banked half-mile.

Watson began to fade, as Anthony Perrego, Richie Pratt Jr., and Danny Bouc all followed Pauch Jr. by Watson to round out the top five one-third of the way through the 30-lap main.

A yellow on lap 12 once again reset the field, and Pauch Jr. the restart he was looking for with Buffalino nearly half a straightaway ahead when he got to second.

Pauch Jr. snagged the lead from his fellow Garden State competitor while Von Dohren had crept his way back into the top five on the restart.

Pauch Jr. claimed the $250 Halfway Leader bonus courtesy of Ad-Art Sign Company before a red flag flew for two cars colliding on the backstretch, with Norman Short getting upside down. He was uninjured.

After the ensuing red flag, Von Dohren fully established his presence as a threat to the leaders. Von Dohren moved into fourth just prior to the red, allowing him to restart on the outside in the second row.

“Billy’s been so good, especially here, I didn’t expect to get around him in that reasonable amount of time,” said Von Dohren of his eventual winning pass.

Von Dohren’s drive around the outside of Pauch Jr. in turns one and two was ultimately the move that won him the race.

Pauch Jr.’s stout run ended on lap 22 with a broken suspension sending him to the pits.

A yellow on lap 24 gave Pratt Jr. a shot alongside Von Dohren and an attempt to steal the win away. Von Dohren would have none of it, driving away from Pratt Jr.

Pratt Jr. ended his night with a runner-up finish in his return behind the wheel of the Dan Sommeling-owned No. 51. Middletown, N.Y.’s Anthony Perrego rounded out the podium finishers in the Vinnie Salerno-owned No. 4* machine.

Boyertown, Pa.’s Mike Gular raced from 15th to finish fourth in the Terry Fasnacht-owned No. 2A and Pipersville, Pa.’s Danny Bouc rounded out the top-five in his self-owned No. 32.

Finishing sixth through 10th, respectively, were: Buffalino, who faded on the late race restarts; Brad Trice aboard the Jeff Brown-owned No. 9; Jordan Watson who ran in the top-10 for much of the race; Frank Cozze in the Dave Renaldo-owned No. 401; and Joseph Watson.

Duritsky used a lap-nine restart to surpass Gumboro, Del.’s Nick Davis for the lead he would ultimately never relinquish. After starting from the pole and dropping

Jesse West won a thrilling 12-lap Delaware Super Truck feature, claiming a near three-wide battle at the line over R.J. Robinson and Robert Smith for the win.

After two wins in 2021, Jay Lowman started his 2022 season off on the right foot, dominating the Delmarva Charger feature to pick up the win.

Did Not Start: Scott Dunn