First For Friesen: Stewart Breaks Through With Deron Rust Memorial $3,521 Small-Block Payday Friday At Georgetown; Large Crowd Takes In Event “Under The Lights” 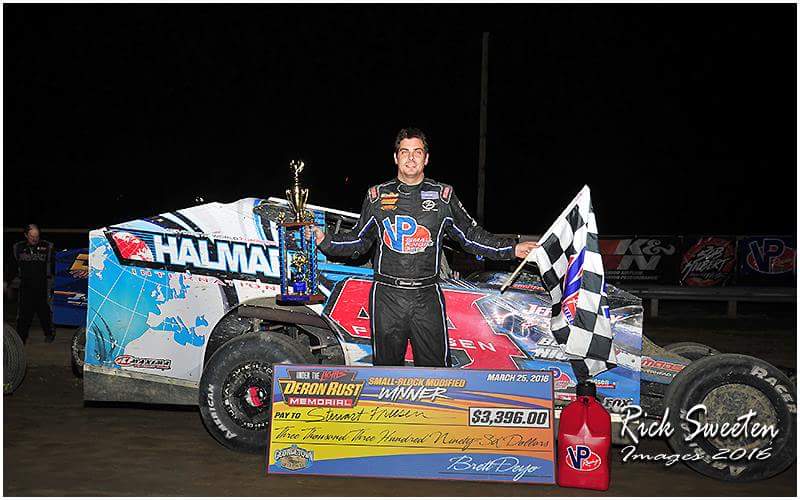 Friesen, the Sprakers, N.Y., traveling star, won for the first time in the state of Delaware, topping the Deron Rust Memorial for small-block Modifieds at the historic half-mile track. And he did it in unlikely fashion. Through the gate, Friesen drew 75 out of 75, starting last in his heat race and surviving a spin in his qualifier to earn a redraw spot.

Friesen then drove forward from ninth in the feature to record the victory in honor of Rust, a former driver and promoter at Georgetown who passed away in 2013. He earned $3,521 for his efforts: $3,396 from the posted purse and $105 in lap money.

“I told the (crew) guys it’s not where you start, it’s where you finish,” Friesen said after climbing from his Halmar International-backed No. 44. “The track was really racy tonight. These guys (Georgetown management) have been working hard here and it shows.”

Local standout H.J. Bunting picked the pole for the 33-lap main and set the pace from the outset. Friesen, meanwhile, charged forward early. Using the speedway’s outside lane, he picked off cars rapidly in the opening laps. Friesen busted into second spot during the race’s first third and began to pressure Bunting at the halfway mark.

At lap 19, Friesen moved up a groove on the speedway and surged ahead of Bunting. Moments later, disaster struck for Bunting, who clipped an infield marker tire in turn four and spun.

“The car was good on longer runs,” Friesen said. “I could see H.J. was starting to ‘hang’ through the corners. I was trying to be patient and bide my time.”

With Friesen out front, Andy Bachetti was making a run forward. Bachetti had rolled off the starting grid 11th and overcame a 360-degree spin on the opening lap. The Sheffield, Mass., driver arrived in second late in the main and chased Friesen across the line.

Bachetti has finished fifth, third and second in his three career Georgetown starts since his debut in the ‘Blast at the Beach’ last August.

“I love the place,” Bachetti said. “I’m looking forward to coming back down later this year.”

Oley, Pa., driver Craig Von Dohren guided Dick Biever’s No. 14s to a third-place finish after running inside the top-five for the entire distance. Matt Jester of Milford, Del., thwarted the late advances of Boyertown, Pa.’s Ryan Watt for fourth. Watt filled out the front five.

Placing sixth through 10th, respectively, were Danny Creeden of Wurtsboro, N.Y., who started dead last (25th) after being collected in a heat-race melee; Melvin L. Joseph Memorial winner Anthony Perrego of Montgomery, N.Y.; a moonlighting Brett Hearn of Sussex, N.J., in the Mike Petruska-owned No. 66; young star Brett Kressley of Orefield, Pa., from 17th on the grid; and Richie Pratt Jr. of Woodbury Heights, N.J., recovering from an early spin.

Heat winners for the 25 assembled small-block Modifieds were Bachetti, Jester and Hearn.

Scott Hitchens registered a $700 victory in the 20-lap Crate 602 Sportsman main. Hitchens, the 2015 Delaware International Speedway champion from Dagsboro, Del., capitalized on a front-row starting berth to lead from start-to-finish. Hitchens bested an intense, four-car battle for the lead that raged through the race’s second half.

Hitchens received $600 from the posted purse and an additional $100 bonus posted by the Rust family.

Devin Dodson was the benefactor of a draw for drivers placing 11th-15th, adding another $100 to his 12th-place envelope.

DERON RUST MEMORIAL RECAPS: A threatening morning/early afternoon forecast subsided in favor of clear skies for the night’s activities. A robust filled the grandstands despite the weather challenges….

A quickly run show saw the small-block Modified feature completed by 9:30 p.m. with only the Crate 602 main to follow….

Smooth, slick and wide track conditions prevailed throughout the night. Infield marker tires installed in turns three and four after the opener kept the racing on the track and sand off the speedway’s upper groove….

Sportsman winner Scott Hitchens rebounded from a tough opener that saw the wheel off his Brandon Blades-owned car soar over the speedway’s outer fence toward Route 113….