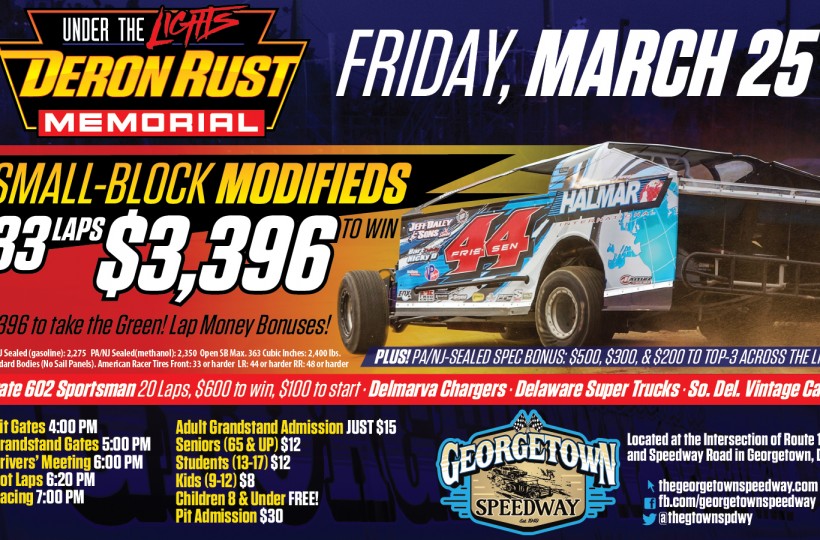 GEORGETOWN, DE – After a wildly successful opener on March 12 – the Melvin L. Joseph Memorial – at Georgetown Speedway, attention now turns to racing “under the lights” on a Friday night.

The Deron Rust Memorial, honoring a true Georgetown supporter as a racer and former promoter, is set for next Friday, March 25 at the historic half-mile oval. The small-block Modified division will serve as the headliner with a 33-lap main paying $3,396 to the winner and $396 to take the green flag. Rust’s iconic number, of course, was the ‘396’ as reflected in this event.
“Our mission in 2016 was to embrace and honor the great history that Georgetown Speedway has,” promoter Brett Deyo said. “Deron Rust had such a passion for racing at the track we wanted to make his memorial event a big part of our early season schedule.”

Just announced, the first three Big Diamond/Grandview/New Egypt-sealed engine combinations across the line will share in cash bonuses of $500, $300 and $200, respectively.

All sealed engines will need a pre-race tech inspection by George McKelvey.

There are no pre-registration forms or car entry fees for this event.

Following the Deron Rust Memorial on March 25, Georgetown Speedway will be silent through May 13 when the United Racing Club (URC) 360 Sprint Cars invade. The “one event per month” schedule runs through the summer season.