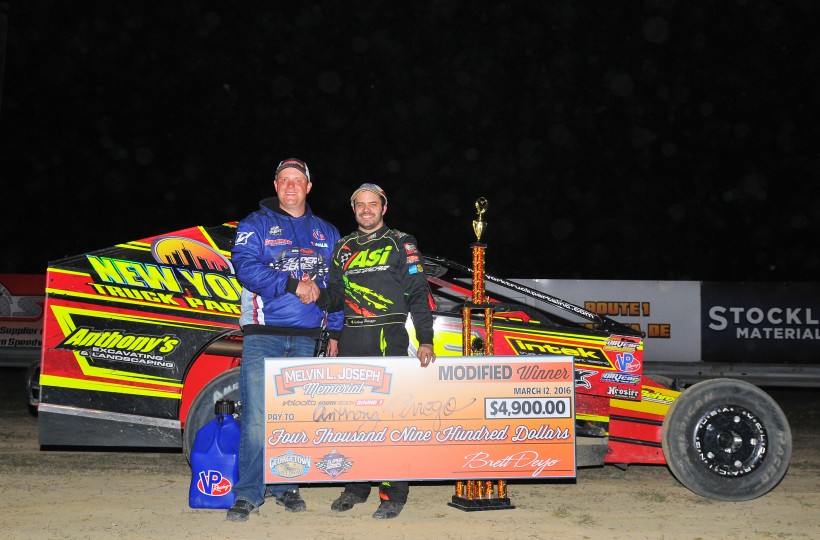 The triumph was Perrego’s second career STSS victory – he captured the ‘Battle of the Bullring 2’ at New York’s Accord Speedway on August 6, 2014 – and it was worth $5,229 including lap money and bonuses.

“I am really happy,” Perrego said with a smile in front of a jam-packed grandstand. “This is my first real big-block win on the road. This is awesome.”

After winning his heat race despite starting ninth, Perrego redrew the number eight starting spot for the 49-lap feature event and slowly began moving through the field.

At the drop of the green it was Andy Bachetti jumping out to the early lead over STSS Velocita South Region defending champion Ryan Watt, H.J. Bunting and Jeff Strunk. Perrego raced into fifth by lap four.

The man on the move, though, was Jeff Strunk aboard the Glenn Hyneman-owned No. 126 machine.

As Bachetti held a substantial advantage, it was Strunk passing one car after another. He started sixth, and by lap six he was passed Bunting for third.

Bachetti neared lapped traffic on lap seven as Strunk continued his assault passing Watt for the runner-up position and quickly closing on the leader. Strunk would assume the lead on lap 15 just before the caution flag was unfurled for the first time on lap 16.

Strunk raced ahead while heavy hand-to-hand combat raged on behind him involving Bunting, Bachetti, Jamie Mills and Perrego. It was Bachetti who emerged in second, and was able to keep the same distance as Strunk approached lapped traffic on lap 25.

“I had a great car,” Bachetti announced. “It just went a little downhill after lap 10, and I just had to stick around.”

After a series of cautions on lap 30, with one of them eliminating Bunting from contention, Strunk was back in front. Perrego battled for second with Mills and Bachetti, and finally took the position on the next lap.

Van Horn, the winner of last year’s STSS race at the neighboring Delaware International Speedway (Delmar, Del.), clicked into the top five from his 17th starting position with just less than 10 laps to go.

“I came from deep, and had a really great car to do it in,” Van Horn said. “I have a brand new Teo car, and a new shock program, and it all worked tonight.”

Van Horn advanced to third by lap 35 as Perrego tried to chase down Strunk. The Boyertown, Pa. driver maintained his lead, as he approached 10 to go.

While crossing the finish line for 10 to go, Strunk was slowed and forced to pull off with a broken axle ending his night and quest for his first STSS victory.

His misfortune shifted the lead to Perrego, who jumped ahead at the next green flag.

“It was sad for him (Strunk) to break, but we’ll still take it,” Perrego said.

Behind the Montgomery, N.Y. driver, Van Horn, Bachetti and Ryan Godown scrambled down the backstretch three-wide for position number two.

Another caution would fly two laps later. On the next restart Mills was caught sideways and melee ensued involving Mills, Billy Pauch Jr., who was racing in the top ten all night, and a host of others.

Perrego stayed steady, though, and guided his New York Truck Parts No. 55 to the victory.

Harmony, N.J.’s Van Horn notched a second-place finish to start his quest for the Velocita South Region championship after being so close last season.

Bachetti took third back to Sheffield, Mass., and was in contention throughout the event.

Godown, of Ringoes, N.J., finished fourth from 11th on the starting grid. He was still riding in seventh on lap 30, but roared through, and even battled for second on multiple occasions.

Milford, Del.’s Jordan Watson rounded out the top-five at the same track where he captured STSS glory last season at the ‘Blast at the Beach 2.’ Watson recovered from a mid-race spin in turn four to rally late for a fifth-place finish.

Finishing sixth through 10th, respectively, were Craig Von Dohren, of Oley, Pa. in the Dick Biever-owned No. 14s; Matt Sheppard, of Waterloo, N.Y., from the 20th starting spot; Stewart Friesen, of Sprakers, N.Y., who also came from the deep in the field, starting 19th; the night’s $249 Hard Charger Brett Kressley, of Orefield, Pa., who moved from 30th to ninth in the event; and 22nd-starter Rick Laubach of Hellertown, Pa.

Forty-three drivers from six different states made the trek to Georgetown, Del. for the season-opening event.

Garden State invader Brandon Grosso pocketed a $1,000 payday in the 20-lap Crate 602 Sportsman main. The Montgomery, N.J., teenager took over the lead during the race’s first half from Dylan Betts and survived a slew of late-race restarts for the victory. Grosso plans to compete in many of the special events to be run at Georgetown this season.

Melvin Joseph Jr. upheld the family name by winning the 12-lap Little Lincoln feature in convincing fashion. Joseph was honored during Victory Lane ceremonies to earn a checkered flag in the event carrying his father’s name. Joseph held off Bunky White and Bryan Tracy for the win.

Racing resumes at Georgetown on Friday, March 25 with the Deron Rust Memorial for small-block Modifieds paying $3,396 to win and $396 to take the green for 33 laps. Also on the card: Crate 602 Sportsman ($600 to win, $100 to start), Southern Delaware Vintage Racing Club, Delmarva Chargers and Delaware Super Trucks.

Complete race information is on the web at: http://www.thegeorgetownspeedway.com/?page_id=120

The STSS Velocita South Region returns to action on Sunday, April 17 at Bridgeport Speedway in Bridgeport, N.J. The ‘South Jersey Shootout’ is a 40-lap, $5,000-to-win event offering $1,000 for 10th and $400 to take the green flag. Also on the card: Sportsman, Outlaw Stocks and XCel 600 Modifieds racing on the inner quarter-mile. XCel 600 Modifieds will compete for $1,000 to win.

Georgetown Speedway, originally constructed by Melvin L. Joseph in 1949, is located at the intersection of Route 113 and Speedway Road in Georgetown, Del., just miles from the Delaware beaches and less than a 40-minute drive from Ocean City, Md.  Visit www.thegeorgetownspeedway.com for more information.

GEORGETOWN NOTES: The day’s opening festivities included a visit from Georgetown Mayor Bill West, who addressed the crowd and expressed the community’s support of racing at the facility. Senator Brian Pettyjohn also attended the event….

The family of Melvin L. Joseph had a large presence at the track, with vehicles on display, equipment and more. The main grandstand was dedicated to the memory of Joseph, a Delaware business icon who constructed the speedway in 1949….

A valiant effort saw Danny Creeden qualify for the main event through a consolation after replacing a left-rear tube busted in a heat-race incident. It was Creeden’s first visit to the track….

Modified runner-up David Van Horn Jr. committed to running the remainder of the events at Georgetown and expressed his love for racing on the half-mile….

Defending Delaware International Speedway champion H.J. Bunting III thrilled the crowd with an outside charge in his heat race to snag a redraw position on the final lap. Bunting ran inside the top-three with Jake Marine’s No. 85 before a tie-rod issue ended his night….