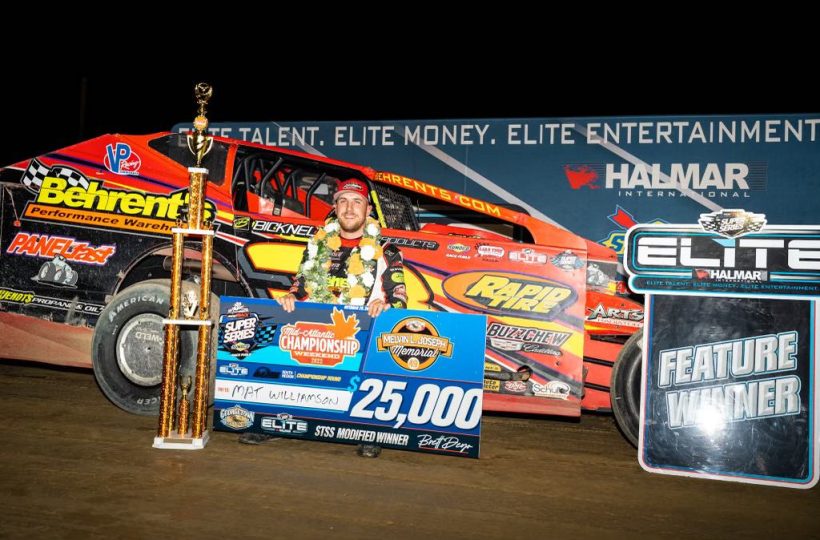 Mat Williamson of St. Catharines, Ont., lived up to his moniker on Saturday night, claiming the ‘Melvin L. Joseph Memorial’ and the $25,000 top prize to go with.

The win was his fourth career Bob Hilbert Sportswear Short Track Super Series (STSS) Fueled By Sunoco victory, and the second worth $25,000-plus.

After a back-and-forth, see-saw battle with Mike Mahaney, Williamson emerged victorious, holding off Matt Sheppard at the end for the win.

Williamson was making his first appearance at the Sussex County half-mile oval during the three-day race weekend.

“It’s just nice to win one of these big races for Jeff and Harry (Behrent),” said an elated Williamson of his win for his car owners. “It’s nice to finish the year off strong and get some momentum going into next year.”

Following the Beyea Custom Headers redraw, Williamson fired from the outside of the front row with Elizabethtown, N.Y.’s Mike Mahaney alongside.

Mahaney fired well at the drop of the green flag, quickly racing to the front, and setting the pace for Williamson and the rest of the field to match.

Four laps in, Williamson was starting to feel pressure from David Schilling, an East Greenbush, N.Y., resident. Williamson held off Schilling’s advances, rolling the outside groove and maintaining his momentum.

Suddenly Williamson and Schilling both began to reel Mahaney in for the top spot just five laps in.

Williamson threw a slide job on Mahaney in the third turn to wrestle the lead away as the field completed the 10th circuit.

Mahaney caught a break the next lap, as Schilling had made a move for second, but the yellow came out prior to the completion of the lap, moving Mahaney back to the runner-up spot.

Mahaney took advantage of his fortune on the restart. Mahaney motored through the bottom groove and took the top spot back from Williamson, which would become a theme over the ensuing restarts.

Another restart came one lap later, and the race saw another lead change. Williamson this time used his top side momentum to drive back around Mahaney to take the lead.

The following green flag run would allow Friesen to slide into the third spot, working over Schilling to crack the podium. One lap later, the race slowed once again due to a slowing Rick Laubach on the back straightaway.

It was Mahaney’s turn to take advantage of a restart, as the driver of the George Huttig owned No. 35 gave Williamson a slide job off the second corner and outgunned Williamson for another change of the lead.

Williamson tried to come back at Mahaney but slipped up allowing Friesen to dive into the fray. The trio went three-wide into the third turn with Mahaney holding the lead and Friesen emerging with second.

The move did not last long however, as Friesen tried the bottom groove in the first turn to get underneath Mahaney and allowed Williamson to shoot back around him for second.

The final lead change came following a yellow with 12 laps to go. Once again, the pair battled into the first turn.

Mahaney fired off the bottom groove and cleared Williamson and moved into the top groove going into turn one. Williamson responded with a dive through the middle of the corner and slid up in front of Mahaney to take the lead away once and for all.

Sheppard raced to second and got an opportunity on the next restart one lap later.

“When he (Sheppard) rolled beside me on that last restart, I thought we were in trouble because he’s been so good and they set the bar with how good they’ve been,” said Williamson of the late race restart.

In the end, Williamson prevailed for the 25k payday.

Sheppard’s runner-up finish was enough to crown him the inaugural Halmar International ‘Elite’ Series Champion, worth $25,000 along with the Hurlock Auto & Speed Supply South Region Championship, worth $15,000.

“We’re excited, it’s been a big year for us,” Sheppard said of his season overall. “The racecar driver in me though is competitive and when we got to second, I really wanted to win the race.”

Friesen settled for a podium finish.

“Good night for our Halmar team, but we’re excited to get to the offseason and get to work and get back to winning these races.”

Mooresville, N.C.’s Max McLaughlin advanced from the 13th starting position to round out the top five.

Finishing sixth through 10th, respectively were Mike Mahaney, who made one mistake on a late race restart to lose a top five; Boyertown, Pa.’s Ryan Watt, who was the Auto Gallery of Delaware Hard Charger ($300) after starting in 19th; Middletown, N.Y.’s Anthony Perrego in the Brian Smith-owned No. 44; Johnstown, N.Y.’s Rocky Warner in the Tadd Parks-owned No. 1; and Pipersville, Pa.’s Danny Bouc concluded his stellar weekend with a top-10 in the Craig and Leslie Pondish No. 6.

While Eckert ran away to hide for much of the race, Amanda Robinson started in sixth and fell back as far as eighth, before racing back to second for a runner-up finish.

Michael Lake, Ross Robinson, who rebounded from a flat tire while running second, and Mark Pettyjohn rounded out the top five.

Watt started from the third position and quickly disposed of Ethan Bill and Eric Kormann to dominate the 25-lap affair.

Kormann, of Carneys Point, N.J., would hold on for a runner-up finish. Dagsboro, Del.’s Scott Hitchens rounded out the podium.

Ethan Bill would round out the top five.

The Smith brothers completed their sweep of the weekend, with David Smith this time winning the Delaware Super Truck feature over brother Robert Smith.

Chris Myers jumped behind the wheel of the Joe Waters No. 3 machine and dominated the field in the Delmarva Charger 12-lap feature.

The Bob Hilbert Sportswear Short Track Super Series (STSS) Fueled By Sunoco returns to action Tuesday-Saturday Nov. 8-12 for the third annual Ollie’s ‘Cajun Swing’ presented by Wegner Automotive. The entire weekend of racing can be seen live on FloRacing (www.floracing.tv) as part of the $150 annual subscription.

Did Not Start: Austin Hubbard

Did Not Start: Mel Joseph Jr.