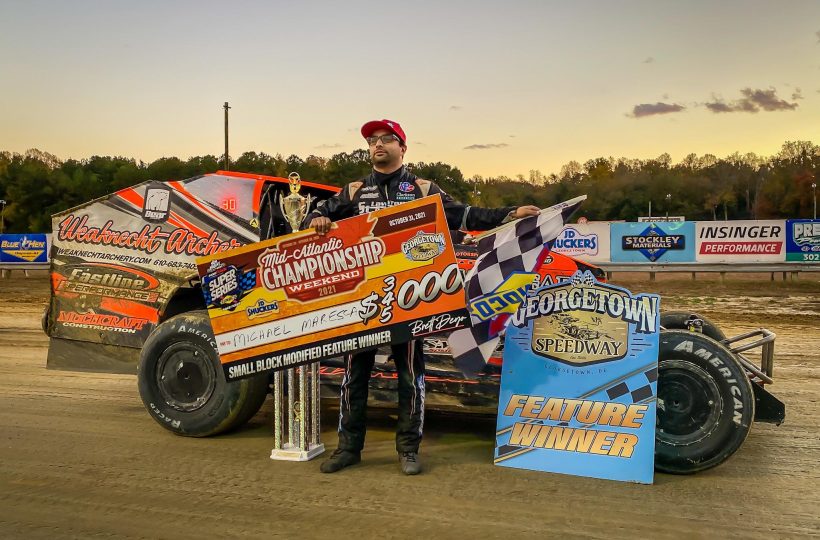 GEORGETOWN, DE – One to take home.

Potsdam, N.Y.’s Mike Maresca bounced back after a rough finish on Saturday to claim the 30-lap Small-Block Modified ‘Spec-tacular’ at Georgetown Speedway.

“It’s always good to get rolling late in the year, I had a good car last night and we took that and applied to this car,” Maresca said after getting a left-rear flat running fourth in the prior night’s Bob Hilbert Sportswear Short Track Super Series (STSS) Fueled By Sunoco feature event.

Maresca came from the fifth starting position to come away with the win, racing nearly eight hours from his home located on the New York side of the Canadian border.

Yellow fever plagued the field in the early going, including a major pileup on a lap-three restart where leader Bouc’s car stumbled and got sideways in turn two. Eight cars were collected in the melee.

The field finally got going after multiple attempts at the lap two restart and Maresca found his way into second, chasing after Buffalino’s Keystone Racing No. 126 machine.

The green flag run fell victim to a slowing Bouc, who came to a halt on the front straightaway. Bouc’s yellow gave Maresca an opportunity to start alongside Buffalino at the front of the field.

After a first lap-14 restart was annexed due to Anthony Perrego’s engine expiring, the second take was one that would determine the race.

Buffalino, who chose the outside, didn’t clear Maresca into the corner, giving Maresca an opportunity at a slide job through the first set of turns.

Buffalino raced up alongside Maresca off the second turn, while Maresca drifted up the track. Buffalino ran out of real estate on the back straightaway, sliding over the berm.

Buffalino fell fourth and put on a fierce charge to reclaim the lead during the race’s second half.

Maresca picked up his first career Georgetown Speedway win, and the $5,000 to go with it in his St. Lawrence Radiology No. 7MM.

Wind Gap, Pa.’s Frank Cozze came home second in the Dave Renaldo-owned No. 401. Buffalino crossed the line in third, after racing to second but slipping off the first turn embankment trying to run down Maresca. The finish was Buffalino’s best in the Glenn and Bonita Hyneman-owned car at Georgetown Speedway.

Oley, Pa.’s Louden Reimert picked up a fourth-place finish after being involved in the lap two melee. Milford, Del.’s Joseph Watson rounded out the top-five despite battling ignition issues in the early going.

Georgetown, Del.’s Matt Hill dominated all 20 laps of the First State Chevrolet RUSH Late Model feature, winning the final feature event of the 2021 season at Georgetown Speedway. He earned $1,000 for his efforts.

Hill started from the outside of the front row, racing around Gumboro, Del.’s Nick Davis and never looking back to claim the win.

Seaford, Del.’s Trevor Collins battled throughout his heat race and the 20-lap main, however, he was able to survive to claim his second consecutive Sunoco Championship Series Georgetown title, worth $750.

Davis raced to the runner-up position and Millsboro, Del.’s Derek Magee rounded out the podium finishers.

Joe Waters picked up another Delmarva Charger feature over Geoff Carey and Ashley Merritt in the 12-lap main.

The Mid-Atlantic Championship Weekend concludes the 2021 racing season at Georgetown Speedway. Stay tuned to the Speedway website and Facebook Page throughout the offseason to stay up to date on all the happenings.

Did Not Start: Neal Williams

Did Not Start: Todd Miller